Deprecated function: Methods with the same name as their class will not be constructors in a future version of PHP; mPDF has a deprecated constructor in include_once() (line 38 of /var/www/dev.takebackthetech.net/drupal7/sites/all/modules/print/print_pdf/lib_handlers/print_pdf_mpdf/print_pdf_mpdf.module).
Author:
Marina Samir
First of all I want to say hi to all the feminist community all over the world, greetings for all the sisters from Cairo! I am Marina, a member of a feminist Egyptian band, called Bnt Al Masarwa – the daughter of Egyptians. We were founded in June 2015, and from that point we have gone through a very long and intense journey that hasn't ended yet.

We, the cofounders, met in a creative writing workshop that was hosted by a feminist NGO called Nazra for Feminist Studies. The aim of that workshop was to write song lyrics inspired by our struggles against the discrimination that we face as young women in Egyptian society. I remember that workshop well. I was sitting with six strangers trying to make a creative work inspired by our personal experiences, but all of a sudden those strangers turned into comrades at the moment when we started sharing our stories, fights, struggles and disappointments.
We wrote many songs, six of them produced by Nazra and Badroom Studio in Alexandria. Only three of us were able to travel to Alexandria to record the album, and while there we discussed the possibility of continuing this work. We decided to continue as a feminist independent Egyptian band that sings in Arabic about what we face as women living in Egyptian society.
A turning point
I remember clearly the setup of the room: a very sunny space with a large and comfortable couch, one of us sitting on the floor. And then came the questions: "Why are we doing this? Why do we want to continue? And how will we continue?"
We wanted to make a collective production inspired from the struggles that we and other women are going through. We wanted to incarnate how patriarchy and sexism affects us on a daily and personal basis.
We want to make a musical feminist production that claims what we and other women are going through because of our existence in a patriarchal, classist, sectarian, racist and centralised society. We want to bring the facts of our lives, struggles, fights and mental health struggles caused by the oppression we face into lyrics and music, as for us it's one of the ways that we fight through and also one of the ways that we can show up, declare our anger and claim our rights as women.
So we decided to make storytelling workshops, and through the stories we wrote the songs. Our lyrics are coming from reality
We have done three storytelling workshops in villages of three governorates in Upper Egypt; 34 women from El Minia, Assiut and Asswan shared with us a part of their souls in the storytelling circle.
In the storytelling circle, I have found myself
In the storytelling circle, I got lost
In the storytelling circle, all of us have shared part of our souls
In the storytelling circle, I realized that I am not alone
and that all of us have been through that
We realized it, we lived it
and we survived it, each one in her own way
In the storytelling circle, was the solidarity in its simplest form
Without statements, demonstrations nor events
Just, listening, sharing, support and love 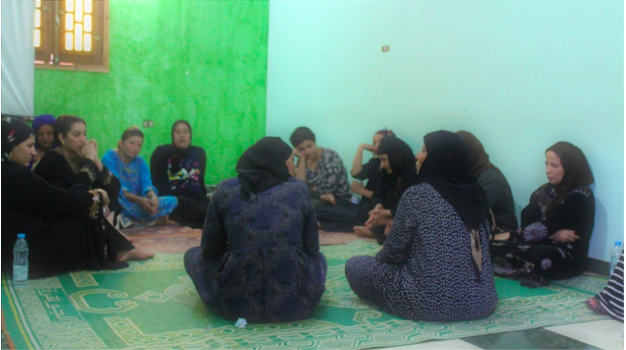 (Photo from the storytelling workshop, in Abu Ghrier village, El Minia governorate, August 2016.)
Stories, lyrics and melodies
After sharing our stories, we, the band members, started writing lyrics inspired the circle.
Make her leave her school
Get her out of her home
Put in a Shwar* her disappointment
Put her toys, the doll and the horse
and build a wall
O bride
O bride
they put you in a wedding dress
But you are so tiny
*Shwar: An Arabic traditional word that exists in Egyptian slang and means all the things that a family buys for a bride before she gets married. And this song was inspired by participants' experiences with the child marriage, as most of them were married at 12-14 years old.
Put together the scalpels and Slay
On a white rag and let fall
her bleeding blood
O mother of the circumcised
Turn off the lights
Give them coffee instead of Sharbat*
O Sweet girl
A smack has passed
everyone has lived
but your happiness dies"
*Coffee instead of Sharbat: In Egypt, one of the mourning rituals is to drink coffee in cases of death, and Sharbat is a very sweet drink that is usually served for celebrations, including when families celebrate the circumcision of their daughters.
A black woman, African
With dark lips
and curly hair
and a true smile
coming from a Nubian
All of a sudden, I heard racism
Racism  ... Racism
what does that word mean?
It means that my color is all that matters
my mind and my heart don't matter
and who I am?
Where do I live?
And what is my religion?
This song was written by one of the participants in the workshop that was conducted in Asswan. She is a black Egyptian Nubian, and she was talking about the violence that she faces because of her colour and race.
I see all the time, on the Nile
the eyes of my mother
You are increasing my wounds
You are burdening my worries
I know that it is not in your hand
the sound of traditions is very loud
and they are watching you
by the eyes of Jailor
…
Yes, I forgive you
but it's not in my hand to forget
but I will pretend
We and eight participants in the Asswan workshop shared our very mixed feelings about our mothers, who were part of the violence and oppression we went through, but at the same time we now realize that they are still facing the same oppression that we all face as women.
Maybe it's my first time
to wear a visible mask
but that's what I am going to say
and I know that you don't know it
I wore masks many thousands times
in talking, handshaking and in my future plans
In our final concert after finishing the workshop, six of the eight participants decided to sing with us on stage, but for their security we all decided to wear masks and Nubian gallabeya (a traditional garment) so no one in the town would recognize the persons on the stage. This song was inspired by the idea of masks and the parts of us and our lives that we are forced to hide because sometimes, we get so tired from fighting all the time.

(Photo from concert in Asswan with the six participants singing with the band, February 2017.)
Last but not least
We made a crowdfunding campaign to produce 10 of the 18 songs that were written during this journey in Upper Egypt, and we received a lot of support, especially from feminists groups in Egypt and all over the world. I shared with you, in this article, parts from five songs that we are producing now, and here I will share with you excerpts from our campaign statements.
Why are we doing this?
For us, feminism is extremely personal. It's a way of living, a way that enables us to question what we have learned and what we have realized about ourselves and society that starts by the family and ends with the broader society.
Singing is our chosen language to express our feelings as well as to document our stories and other women's stories for history since history is always written by the most privileged and the most powerful. Our dream is for our songs to last.
Why "Mazghuna?" ("Mazghuna" is the name of our upcoming album.)
Mazghuna is the old name of " Abu-Ghreir" village in El Minya governorate, and it was our first stop in our upper Egypt project. When we asked the women what it means, we were told that it had different meanings; one was "Mazghuda" which means the woman who was punched and silenced or "Masjuna" which means an imprisoned woman. We had the feeling that the name perfectly expressed the whole experience, and stemmed from it.
We are singing for the 34 women who opened their hearts and shared with us their struggles. We are singing for ourselves, to talk about what we are going through, what we are living and feeling, so no one will talk on behalf of us.
By singing we started, and by singing we choose to continue.
#FeministsSinging
SaveSaveSaveSaveSaveSaveSaveSave