Movement building is the technology for feminist resistance

Movement building is the technology for feminist resistance

Deprecated function: Methods with the same name as their class will not be constructors in a future version of PHP; mPDF has a deprecated constructor in include_once() (line 38 of /var/www/dev.takebackthetech.net/drupal7/sites/all/modules/print/print_pdf/lib_handlers/print_pdf_mpdf/print_pdf_mpdf.module).
Author:
Sekoetlane Phamodi 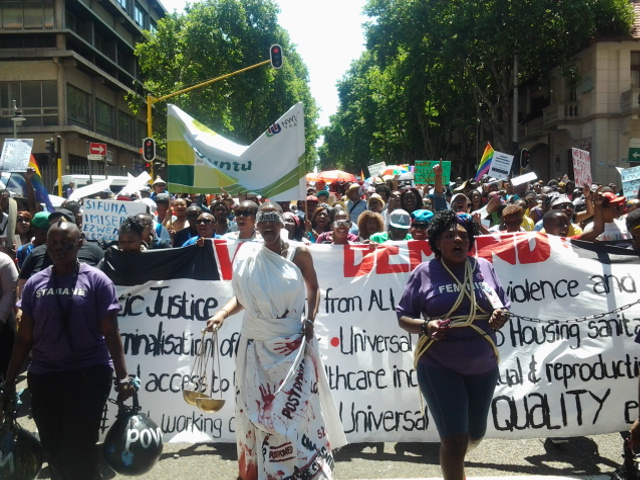 Written by Sekoetlane Phamodi, a South African activist who works at the intersections of social justice, strategic communications and the law.

"Our greatest quality, in the resistance,” she said, gently, to me on the front porch of her garden cottage in Kensington, having our morning coffee and smoke, “is our boundless capacity to imagine another world, in spite of how much patriarchal power works to grind us down.” My best friend and I had been up all night, plotting how we would incite the re-imagination of Pride, in Johannesburg, spurned by the collapse of the first and oldest Pride in Africa. She had roped me into my well-designated role as support-staff ahead of a meeting that would launch the Johannesburg People’s Pride movement: JPP.

The year before, at my first Pride, she and our comrades in the One in Nine Campaign’s Direct-Action group, peacefully disrupted the Johannesburg Pride Parade. The parade, whose lead drag-queens and muscle-marys (un)dressed in only boots-and-panties made the Sunday front-pages like clock-work, every year, was set in the jacaranda-blossom carpeted streets of “nice, safe,” and predominantly white suburbs of Saxonwold, Parkview and Rosebank whose exceedingly high walls concealed exceedingly opulent manor-houses with expansive gardens, and many servants who the Madams treated “like family,” but for their three-piece uniforms and the stain in their skins.
The disruption called attention to the ongoing structural and daily oppressions of other(d) queer people who continued to experience the intersections of white-supremacist, capitalist and heteropatriarchal violence in spite of the legal affirmation of LGBTI rights which were the apparent cause for celebration at that year’s, and preceding Prides. The ask was for a moment of silence to reflect on the crisis of violence against womyn, queer or otherwise, in South Africa, and interrogate how our legitimate celebration of the de-legislation of our assholes and our lives was being experienced by othered queers, not unlike ourselves, who did not enjoy the same power and privileges those of us who could participate in the parade do. The response: assault, white-racism and the refusal to engage with a political act of defiance against the a-political vehicles for corporate and political pinkwashing we have seen prides across the globe increasingly become. It has to be seen to be believed.
https://www.youtube.com/watch?v=Hnxip-T_Hnw
The festival, 22 years before, began as a resolutely political march of brave but trepidatious feminist and queer activists of all races, classes, gender identities and political orientations to claim our citizenship and visible participation in the construction of our new democracy. People wore paper bags over their faces to conceal their identities because it was still illegal to be queer then. South Africa was transitioning out of an oppressive regime whose policies and practices would be classed a crime against humanity: apartheid, and into a democratic dispensation defined by the will of the people for the first time. The institutions and technologies of colonial-apartheid oppression had unravelled, and queers were claiming their rightful seat at the table.
JPP would try to do this again, in a way, after the vacuum left by the closure of the Johannesburg Pride “Not for Profit" Company. Through the direct support of established grassroots pride formations like Ekurhuleni Pride, Vaal Pride, and Soweto Pride - a predecessor and kind of mother to JPP, where the One in Nine Campaign and the Forum for the Empowerment of Women were the midwives - the mandated working group was set with the task of forming a different kind of practice in the community building around and organising of pride that could hold the contradictions we live within our still fractured society. A practice that could hold protest with celebration. A practice that would seek out who wasn’t in the room, why, and how we could facilitate their direct participation in the collective negotiation and creation of a pride that didn’t seek to centre but locate our queernesses in the many identities we occupy and negotiate, and the spaces we occupy and move between. 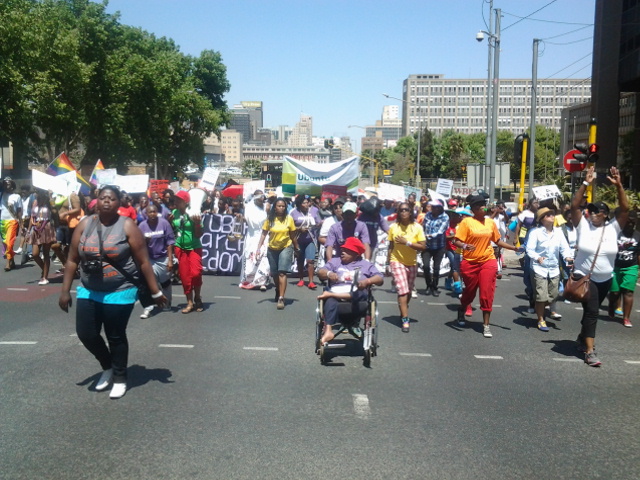 As a principally self-funded movement, we had to find ways of establishing consensus-based decision-making, keeping meetings transparent, open and actively participatory and being deliberate about taking individual and collective responsibility for deliberately sharing and mutually developing each-others' respective skills to enable the even sharing of labour, power and responsibility for the resilience of our movement. Many of us immediately wanted to set up sophisticated and secure technological systems to enable the cheap and convenient convening of meetings and distribution of information so we could “just get on with it” and organise pride, but because of our deliberate commitment to our critical analysis of how assumptions about mobility, access to resources, and the information and technologies that make it more readily available inherently kept critical voices out of the room, we were very quickly sobered up to the fact that this was impossible. Having to be actively mindful of and question our assumptions about what the constituents of the movement we were trying to build had and didn’t have access to; and how this shaped their experience of it, we were faced with the obvious directive from the growing movement to use Facebook and WhatsApp as our primary organising tools.
In addition to the months-long series of political workshops which we also deployed as mobilising tools, through which we would develop our manifesto, we streamed working group meetings for those who had the data to participate, but not the ease of mobility, as well as encouraged remote participation through moderated group chat. We would use our Facebook page as entry point to distribute content, and shape the movement in our own image through dialogue. We would coordinate the movement of resources through mobile money, and coordinate the movement of people across cities and provinces through WhatsApp groups whose members could reach unspeakably vast networks. And, in revitalising a political pride that was a site of both protest and celebration, asked those who would join the movement, why they will march in Johannesburg People’s Pride, and other Pride marches across South Africa’s marginalised communities.
https://www.youtube.com/watch?v=VWlIjr08aH8
Over three years, the movement would connect Black, poor, disabled, transx grassroots movements from all over the city, and across the country to incite the radical reconceptualisation of queer-led organising and participation in the political debates and decisions of the day. From anti-Black xenophobic scapegoating and violence, to the #FeesMustFall and #EndOutsourcing campaigns, which broke new ground in the growing centrality of an open and secure internet in protest and its mediation, JPP had clearly reasserted the possibilities of intersectional queer organising, through an aspiration towards critical feminist praxis.
Several weeks ago, some years after our departure from the organising collective of JPP, my best friend and I are sharing our regular coffee and a smoke. I’m looking at her office block set in Johannesburg’s Southern urban skyline, from my bedroom window, trying to make her out on the verandah that gazes into the urban forest of the Northern suburbs. We were cynically bemusing ourselves about how the conversation around Johannesburg Pride not being “inclusive” enough was an annual stuck-record. There was upset about the revived Johannesburg Pride being held in the elite lifestyle village of Melrose Arch. “They were calling us the crazy black lesbians who broke pride,” she chuckles. “And now that the crazy black lesbians are gone, they’re still stuck with the same problems,” I retort. “I suppose this is how the change happens,” she says to me, a little solemnly. She reminds me of a thing one of our mutual feminist mothers used to say about how our duty to ourselves and one-another, as those at the margins, is to reach out to one another, hold hands and move the centre to the left, with us. “After that interruption in 2012, and JPP, no one can ignore it anymore. No one can ignore that any pride that claims to be representative or inclusive has to be inherently political and seek everyone out where they are."
For me, the greatest gift of JPP and the movement that both formed and was born out of it, was learning that in addition to its function of mechanising the change we seek to see in the world by placing ourselves in the service of the struggle, in spite of the technologies that we use to do it, movement building is also, and necessarily, a conscious and deliberate practice of making and holding space to collectively and reflexively find one-another and recognise the interconnectedness of our struggles and our freedoms.